TR Warszawa has been invited back to the Athens & Epidaurus Festival in Athens, Greece, with a performance of Katy Wéber’s “Pieces of a Woman” directed by Kornél Mundruczó.

Athens & Epidaurus Festival takes place between June 1 and October 10, 2021 in Athens. The Greek theater festival has been organized for over 65 years and is one of the most important artistic events in Europe. Every October, the most important artists and theater companies from all over the world come to the ancient city. This year, the program starts in June and the international part dedicated to closed spaces will take place at the beginning of the season.

In 2021, in addition to the Athens & Epidaurus Festival, TR Warszawa’s productions are also included in the programs of Kunstenfestivaldesarts and the 75th Festival d’Avignon, among others. The TR Warszawa team’s trips can be followed on social media under the hashtag #TRonTour.

Pieces of a Woman

“Pieces of a Woman” is a feminist family drama set in present day Warsaw, powered by the strength and determination of female characters. A family get-together shows, as if through a lens, the problems and internal conflicts of Polish society.

The protagonist of the play, 30-year-old Maja struggles with a personal tragedy. In order to get back on track, she must question her old life and rebuild from scratch the relationships with her family. “Pieces of a Woman” is an evocative picture of modern women who fight for the right to decide about their own life. Kornél Mundruczó – director, and Kata Weber – author of the script, portrait each character with great empathy – they don’t judge or criticize any of the characters gathered around the family table. The performance employs cinematographic means of expression and captivates the viewers with intimate narrative, the realism of the details and tenderness of the actor’s creations. “Pieces of a Woman” is a second, after “The Bat” (premiere 2012, prod. TR Warszawa), Kornél Mundruczó’s play produced in Poland. Both performances have gained recognition of Polish and international audiences. 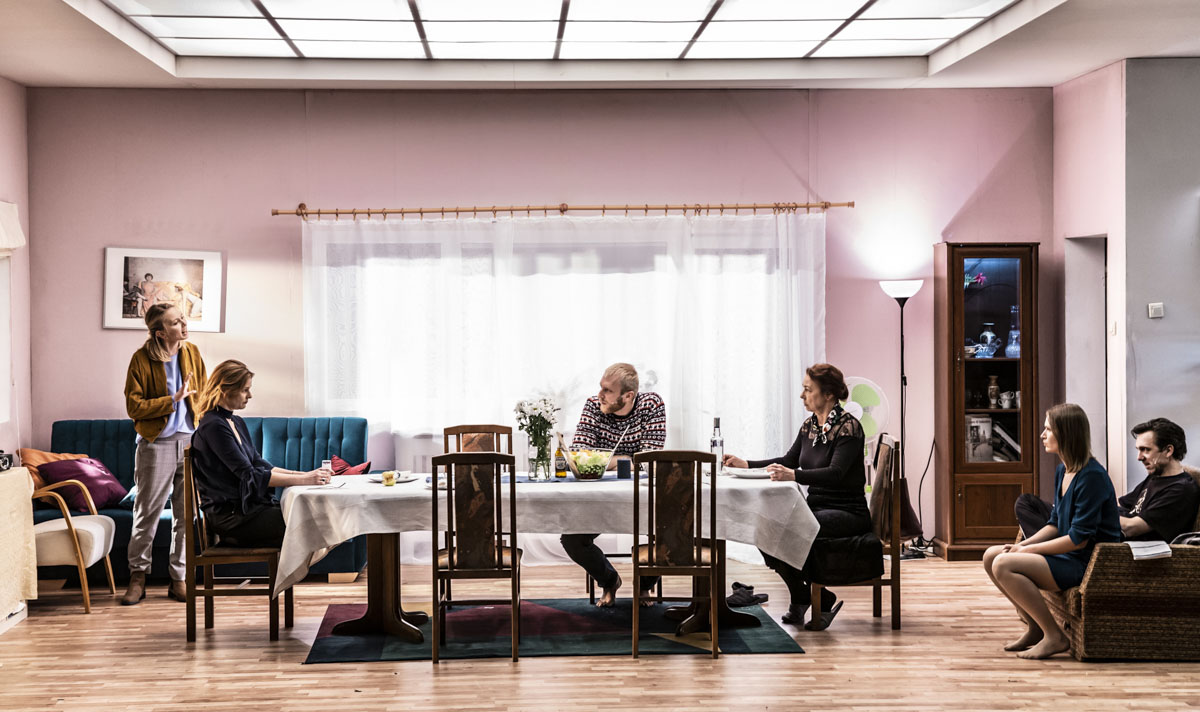 The play was one of the most frequently mentioned plays by Polish theater critics in the 2018/2019 season summary “The best, the best, the best of the 2018/2019 season”, published in “Teatr” monthly. “Pieces of a Woman” has also opened a program of special screenings as part of TR Warszawa’s Stay at Home, Don’t Leave the Theatre! – in March 2020 the premiere broadcast of the recording was seen by around 10,000 people. In November 2020 the performance of “Pieces of a Woman” was streamed live straight from the stage of TR Warszawa/ATM Studio via the TR Online platform. The streaming was directed by Michał Dymek, winner of the 2020 Golden Lion Award in the best cinematography category for his work on “Sweat”.

The premiere of Katy Wéber’s “Pieces of a Woman”, directed by Kornél Mundruczó, took place on 13 December 2018 at TR Warszawa/ATM Studio. The production has been recognized many times at theater festivals in Poland, including by the selectors and the international jury INFERNO of the 12th International Theatre Festival Divine Comedy, which awarded TR Warszawa’s production with the Grand Prix for the best performance of the festival and acting awards for Justyna Wasilewska (first acting award) and Dobromir Dymecki (second acting award). In addition to 7 acting awards and the Grand Prix of the 12th International Theatre Festival Divine Comedy, the production received the Konrad Swinarski Award for Best Director in the 2018/2019 season (for Kornél Mundruczó).

Pieces of a Woman na Netflixie

On January 7, 2021 the long-awaited premiere of the film version of “Pieces of a Woman” took place. The Netflix production based on a script by Katy Wéber and directed by Kornél Mundruczó has its origins in a play created by a pair of Hungarian filmmakers on a special commission from TR Warszawa. The world premiere of “Pieces of a Woman” took place at the 77th Venice International Film Festival in September last year. It was then that Vanessa Kirby received the award for the best actress of the festival for her leading role of Martha, and Kornél Mundruczó was awarded the Arca Cinemagiovani Award for the director of the best film of the festival.