1st of April TR Warszawa has announced a tender for the appointment of the general contractor for the construction of the TR Warszawa venue in the Parade Square. Requests to participate in the tender may be submitted until late April 2022.

It’s a historic moment for TR Warszawa team who, under the direction of Grzegorz Jarzyna, have been developing new theatrical ideas and phenomena, introducing them to the mainstream Polish theatre and building the brand for the Warsaw and Polish theatre in the world since 1997. The new seat of one of the most internationally renowned Polish theatre companies will be located in the Parade Square, in the very centre of Warsaw, next to the Museum of Modern Art in Warsaw. Construction of the TR Warszawa venue is one of many public investments in downtown Warsaw carried out within the New City Centre project.

Construction permit for the new theatre became final in January 2021, thus making the way for the next construction stage. A contractor selected in the procurement procedure will construct the 15.000-square-metrer theatre venue designed by a New York-based architectural studio Thomas Phifer and Partners in cooperation with Polish studios – APA Wojciechowski and Buro Happold. A consortium of ECM Group Polska S.A. and Portico Project Management is the contract engineer. The construction is financed by the Capital City of Warsaw.

During the first stage of the competitive dialogue tender procedure prospective contractors will be qualified based on the terms and conditions of the tender procedure and selection criteria. The contracting entity will verify if the economic operators satisfy the statutory criteria and the criteria set by the contracting entity, among others. Only a selected number of potential contractors will be admitted to the next phase of the tender (the negotiations). Announcement of the tender result is scheduled for October/November 2022. TR Warszawa expects that many construction companies will be interested in this tender and that the fight for this prestigious contract will be fierce. The investor expects that the new building will open in autumn 2026.

TR Warszawa building in the Parade Square will be one of the most innovative theatres in Europe. The building, designed by the Thomas Phifer & Partners architectural studio, will house two theatre halls (BIG BOX and BLACK BOX) with a surface area of 2 500 square meters in total (including the BIG BOX with the largest rotating stage in Poland and flexible seating system with a maximum capacity of 700 seats), educational rooms, artistic explorations centre, artistic residencies programme centre, audio studio, video studio, rehearsal rooms (including a room for read-throughs), a spacious foyer, a restaurant, and two bars. Every night up to a few hundred people will be able to participate in the artistic events held in the building.

TR Warszawa’s seat in the Parade Square is an element of a two-building complex comprising of the theatre and the new headquarters of the Museum of Modern Art. The construction of the Museum of Modern Art and TR Warszawa is one of the flagship cultural investments within the New City Centre project – a long-term strategy, executed in multiple stages by the Capital City of Warsaw. As a result of modernization actions and new investments, the very centre of Warsaw will become not only a metropolitan, prestigious, cohesive, and green space but also an open, friendly, accessible, and safe environment for everyone. TR Warszawa and the Museum of Modern Art buildings will complete the space of the future Central Square – the heart of a modern metropolis. Their launch will open new cultural possibilities to the city’s residents and visitors.

“Construction of the new TR Warszawa venue is one of many public developments carried out within the New City Centre project. It is another example of the city’s investment in culture despite the difficult times, also from the budget perspective – says Aldona Machnowska-Góra, Deputy Mayor of Warsaw. – Thanks to modernization and new investments, the very centre of Warsaw will become not only a prestigious, cohesive, and green space but also an open, welcoming, accessible, and safe environment for everyone” – adds Machnowska-Góra.

It is very important that the Capital City of Warsaw invests in culture and culture-building development of our city. The new seat of TR Warszawa, designed by a New York-based architectural studio Thomas Phifer and Partners in cooperation with Polish studios – APA Wojciechowski and Buro Happold, will be one of the most innovative theatre venues in this part of the world and one of a few theatres that have been constructed as standalone theatre venues in Poland in recent years. 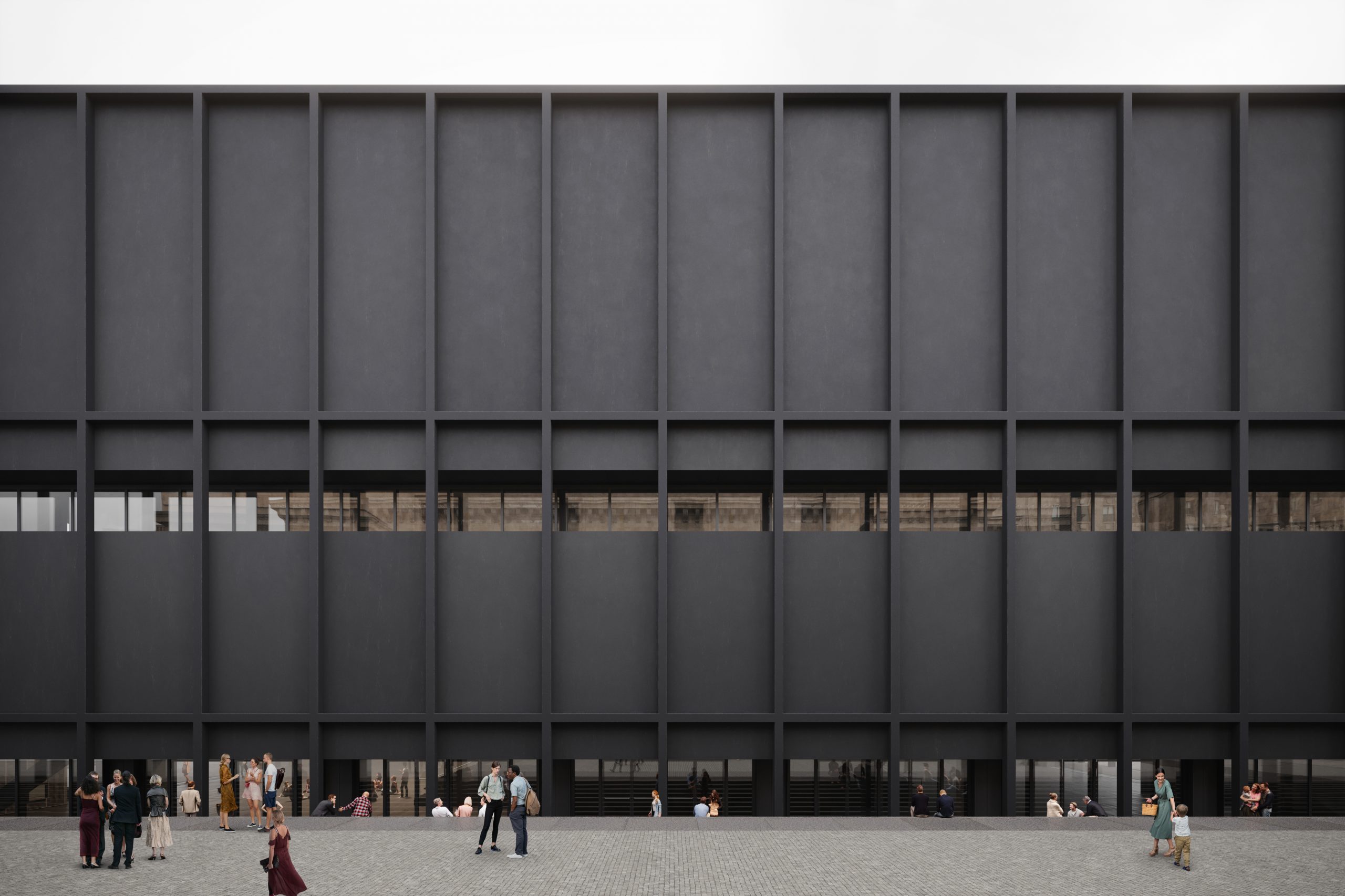 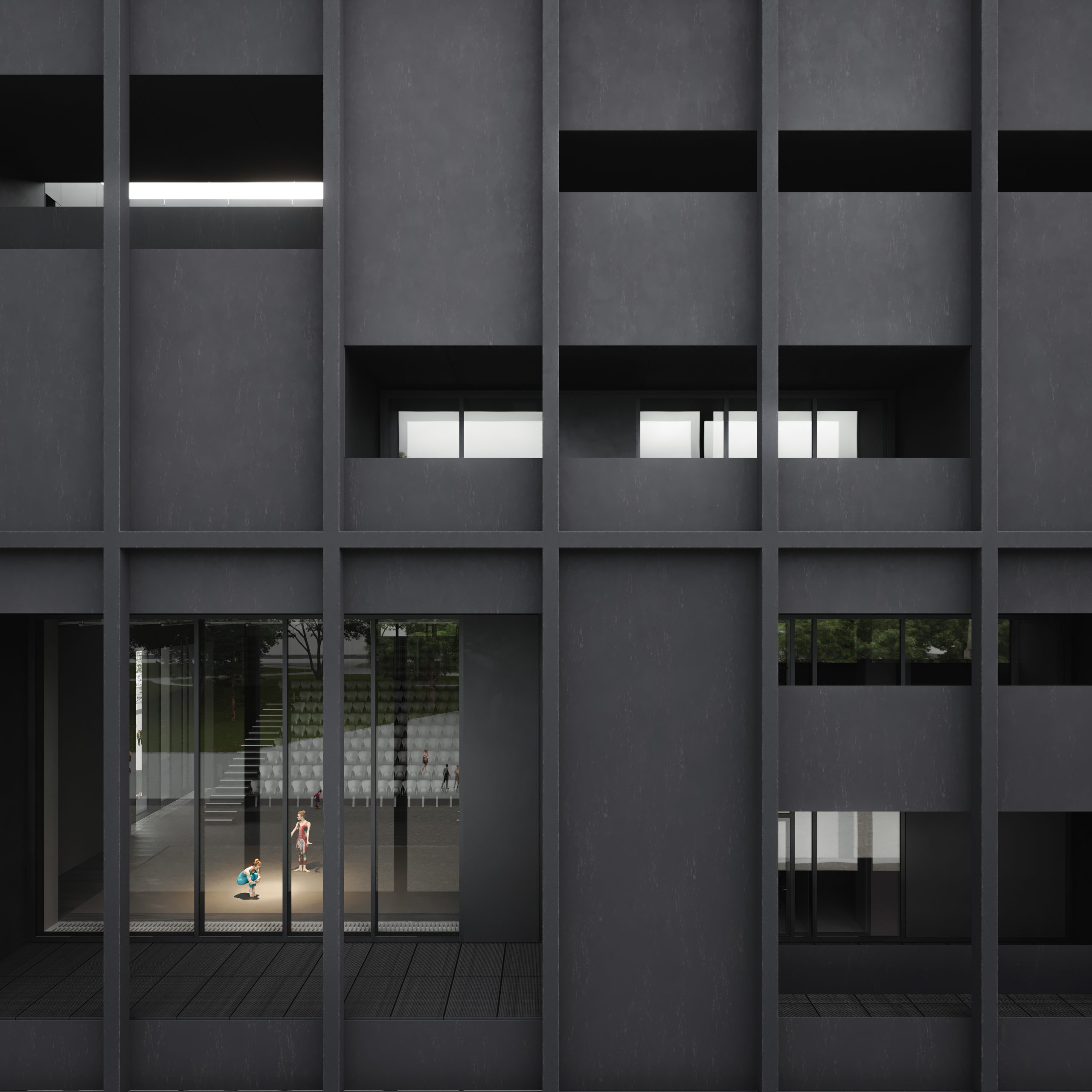 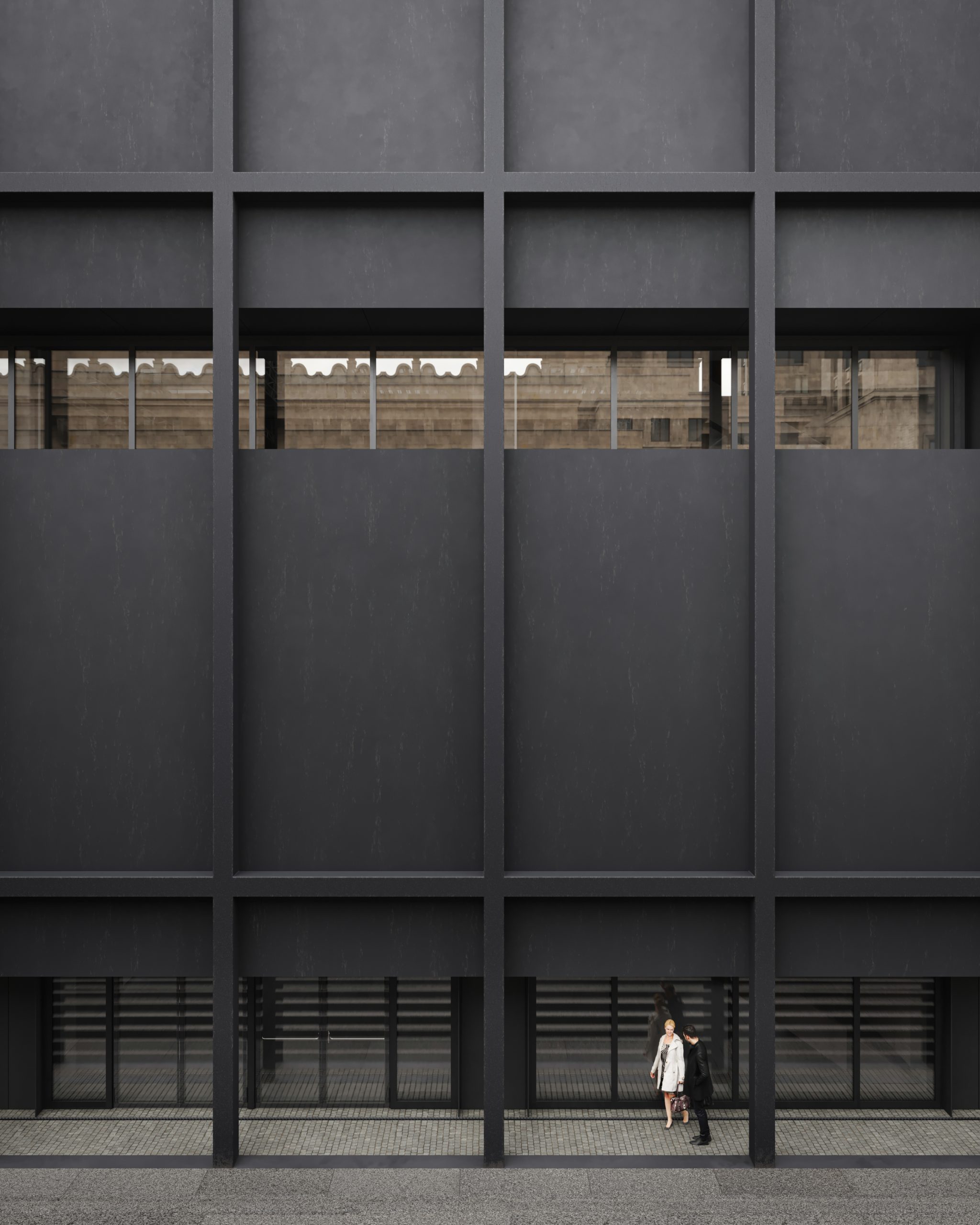 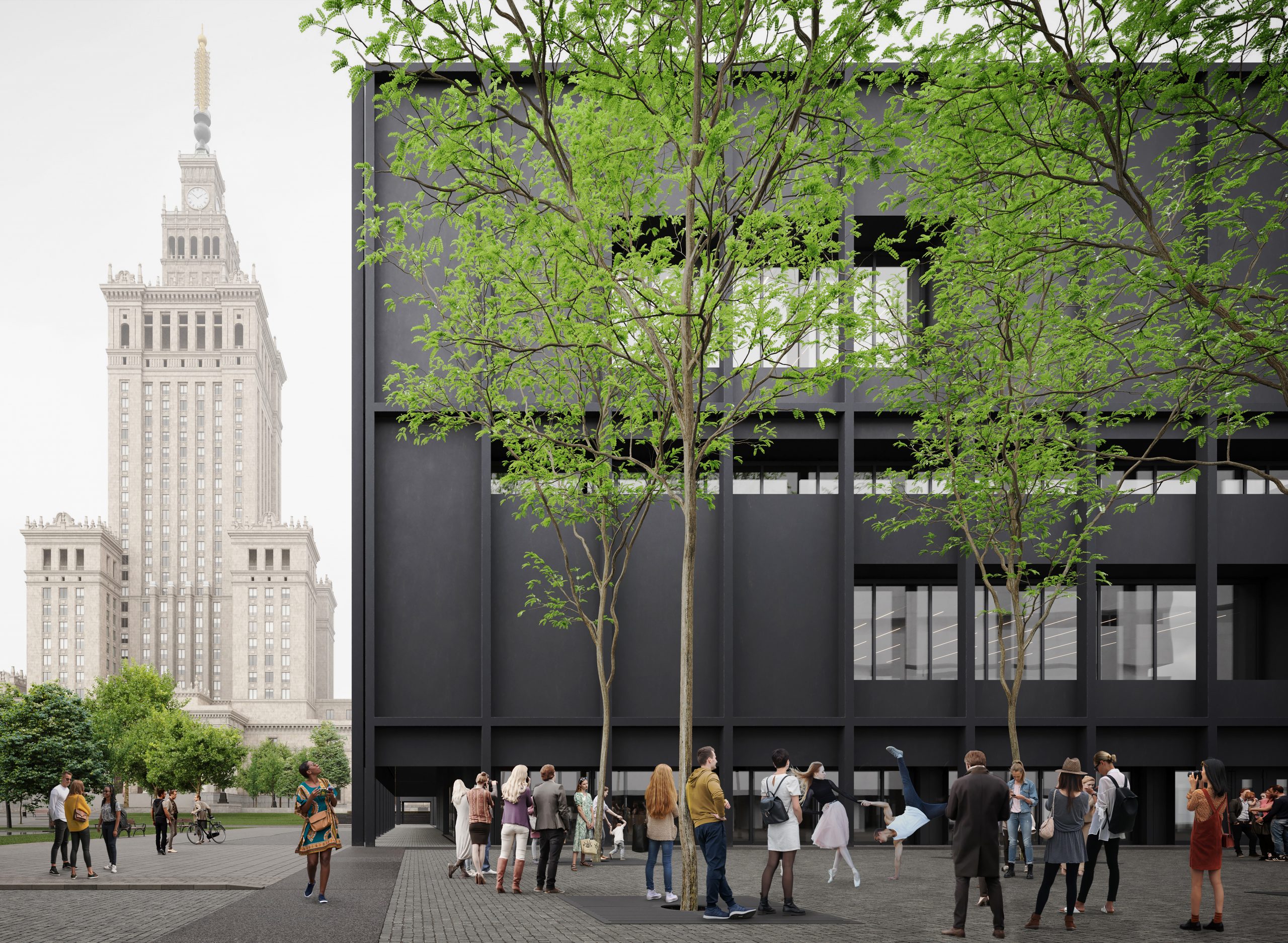 Project of TR Warszawa 2022 theatre on the Parade Square. Designed by Thomas Phifer&Partners

TR Warszawa is a theatre that has taken a now permanent place among cultural institutions in the capital city and is one of the most recognized theatre companies in the world. TR Warszawa team under the direction of Grzegorz Jarzyna have developed modern performing forms and a new drama language. The theatre’s programme is based on an artistic line formulated by the team under the direction of Grzegorz Jarzyna. TR is a place, where the audience can catch up with the latest artistic trends in Poland and other parts of the world. Here, in the late ‘90s, a new model for the operation of theatres in Poland was introduced. It was here that a group of female and male creators, artists, actors and actresses, operators and managers, who shape Polish theatre today, have gained their experience. TR Warszawa through its programme offer integrates Warsaw residents and visitors into the cultural life of the capital city. Among the values that TR Warszawa team follows are: trust, responsibility, openness, courage, freedom, and community. Together with other theatres and cultural institutions it shapes modern citizenship and builds the international reputation of Warsaw as an important centre of artistic life. TR Warszawa brand is recognized all over the world –
which is reflected by the fact that the company has been invited to present their performances at the most important international festivals for many years now and the company and the creators associated with it have received dozens of awards.

Two portals that will connect the main stage space with the Parade Square and Świętokrzyski Park will be a truly unique feature of this building. The gates will enable the organization of open-air-like artistic concerts and performances. With the glass walls of the BIG BOX (the main stage) and its location on the forum level, the city becomes a natural background for the performances held inside the building and open-air events. At the same time, the theatre will open up to the city, by inviting the pedestrians to observe its everyday operations.

The foyer will be a space for meetings and programme-related events, a restaurant, bistro, box
office, and a cloakroom. The upper floors house a center for artistic exploration, residencies, and educational activities as well as audio and video studios and rehearsal rooms (including a dedicated room for read-throughs). Technical rooms and backstage facilities are located in the core section of the building and the underground levels.

The museum and the theatre buildings will be connected by a forum – an inviting, open, and vibrant place for cultural activities and meetings in an open space. Simple, strong facades of the buildings mark the edges of the newly designed Central Square and give shape to the more intimate internal forum, which will be simultaneously an entrance, a courtyard and, a bridge; integrating the museum and the theatre with the new Central Square and Świętokrzyski Park.

The museum, theatre, and the forum between them will form a coherent whole. Simple forms of the buildings will contrast with the massive and striking Palace of Culture and Science and the commercial architecture in the area. The facades, constructed of simple materials, draw inspiration from abstract artworks, epitomize the creative life of the capital city and emphasize the key role that the Museum of Modern Art and TR Warszawa have in the development of the cultural center of Warsaw.